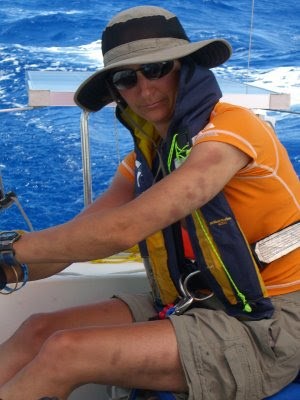 Nat and a few bruises from the 'bouncing around'... 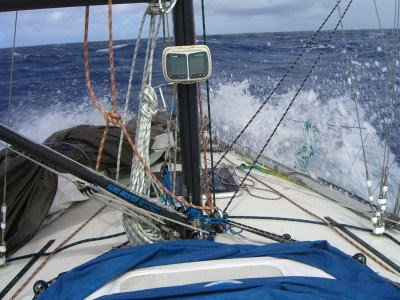 Elise was eager to raise funds! 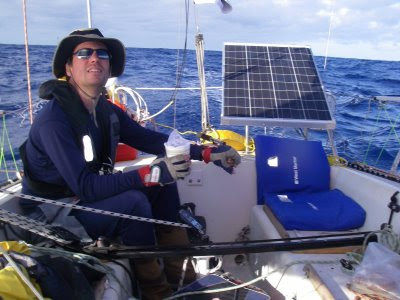 Nathan is multitasking at the helm 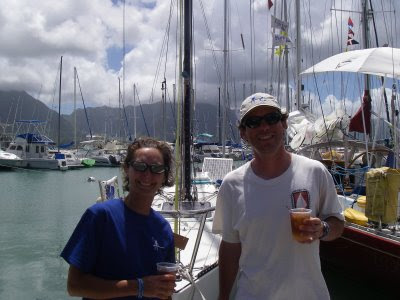 The team proudly displaying their "Team Sarcoma" bracelets at the finish in Hawaii. 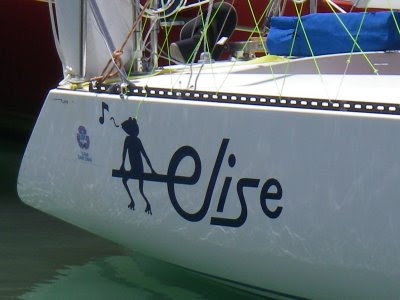 And Elise was proudly displaying the Team Sarcoma logo!

Elise successfully completed the 2070 nautical-mile run from San Francisco to Hawaii during the Pacific Cup raising about $4K for sarcoma research in the process.

BeatSarcoma would like to thank all the Beethovens (Team Elise) who made this adventure possible. More photos and videos available at blog.beatsarcoma.org.
Pacific Cup 2008 Crew
Nate - Skipper

Nathan is a long-time sailor and racer returning to blue waters after a few years of mostly bay racing and coastal work. He is a naval architect/marine engineer working in heavy industry (tankers, containerships, terminals). focusing on software. After a few crewed runs several years ago, 2008 will be his first double-handed Pac Cup.

During the day, Nat is a Product Manager at Google and at night she helps run BeatSarcoma. She took up competitive sailing after she landed a job in the UK, a sailor's heaven. Despite a few minor setbacks such as drifting for four days in the English Channel, sinking in the Pacific or being knocked overboard in San Francisco Bay, she bought "Elise", an Express 27, in 2006. She races under the burgee of the Saint Francis Yacht Club. 2008 will be her first Pac Cup.
Posted by Nathalie Criou Racing at 6:32 PM